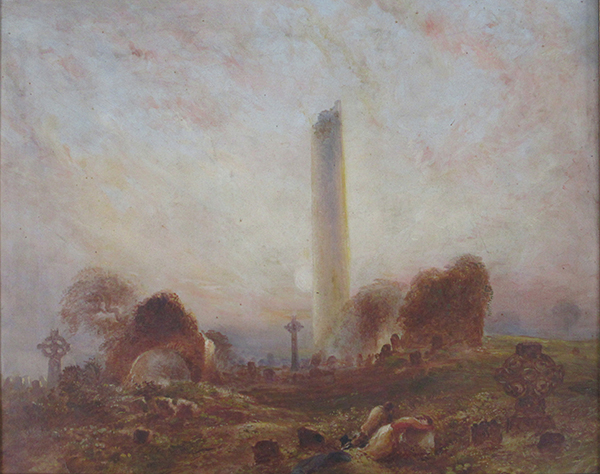 The Society is delighted to announce the acquisition earlier this year of a painting of Monasterboice by Dundalk-born landscape painter and antiquarian Henry O’Neill (1798 – 1880).The painting was one of several by O’Neill from the collection of the late Henry ‘Harry’ MacDowell, a well known Co Kildare based genealogist originally from Dundalk and a grandson of William Tempest, the founder of Dundealgan Press.

The artist, Henry O’Neill, was born in Dundalk in 1798. He was raised in Dublin by an aunt and studied art from a young age. His paintings were exhibited at the Royal Hibernian Academy and he was elected an Associate of the Academy in 1837.

The painting is dated c.1840 and shows the Monasterboice round tower surrounded by high crosses and the church ruins. Two figures kneeling in prayer can also be seen in the foreground. The romantic nature of the painting and the ivy covered ruins convey a very different impression to that of the well-maintained present day site.

O’Neill was also an antiquarian and his interest in Irish antiquities is clearly reflected in his painting of Monasterboice. His best known published antiquarian work was Illustrations of the most interesting of the Sculptured Crosses of Ancient Ireland, Drawn to Scale and Lithographed by Henry O’Neill, published in 1857. He also planned a multi-volume study of Irish round towers, but only the first, describing four round towers in Co Dublin, was published in 1877. He died in Dublin in 1880.

Given the subject of the painting, the Society’s council felt it was important that the painting should be returned to Co Louth. Arrangements to make it available for public viewing are currently underway.